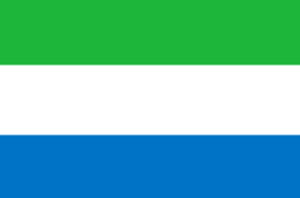 According to the Sierra Leone Ports Authority-SLPA notice, all goods imported into the country will be subject to uniform requirements and perform pre-manifest information, The Advanced Cargo Declaration (ACD),or called International Cargo Tracking Note（ICTN）, and provides an Entry Summary Number (ENS), the local port authority will decide whether or not to agree to the shipment of the goods from the port of departure in accordance with the contents of the pre-manifest.

The original BL could not be issued without the validated ACD（ENS） certificate. In addition, this will also result in a deduction, penalty, etc. at the port of destination.

According to the provisions of the Sierra Leone Ports Authority-SLPA, the ACD (ENS) certificate must be issued within one week before sailing, and the Certificates must be completed before arriving at the port of destination. Late processing will result in fines.

How to use Sierra Leone ACD（ENS）

The original Sierra Leone ACD（ENS）certificate (in PDF format) will be sent to the applicant who will forward this certificate to the consignee and the shipping company at the port of destination for customs clearance.

2.After receipt of the above application documents, the official payment notice will be issued. The ACD（ENS）number will be issued once we receive the bank slip and confirm the payment.

3.After receiving the ACD（ENS） number, the applicant can provide this number to the shipping company to issue the original bill of lading.

Need to handle the port of the Sierra Leone ACD (ENS)

Freetown is located in Sierra Leone (whole: the Republic of Sierra Leone Republic) ROKEL northwest coast (ROKEL) south bank of the estuary, the brink of the Atlantic’s east side, is the largest harbor in Sierra Leone. As early as in 1787 the United Kingdom for the construction of the colonial blacks, is now the capital of Sierra Leone and the country’s political, economic, cultural andShow more

The main agricultural products for coffee, cocoa, peanuts and brown kernel and so on. The port is about 30 minutes away from the airport by hydrofoil. The port is a tropical rain forest climate, the prevalence of winter to the northeast wind in the east, the summer more than the West to the west. The average annual maximum temperature of 34 degrees Celsius, a minimum of 20 degrees Celsius. The annual average rainfall of about 5000mm, is one of the largest rainfall in West Africa.

Western Port of Sierra Leone. Located near the mouth of the island of Pellet in Sierra Leone, near the Atlantic Ocean. 24 kilometers southwest from Freetown. Population 4,500 (1974). Early in 1933 for the Malangpa iron ore export port, a dedicated railway (84 km long) through the mine. Channel water depth of 12 meters, can be parked 100,000 tons ore ship.

Lion Rock Southwest coastal islands. The island is 51 kilometers (32 miles) long and 24 kilometers (15 miles) wide. West Africa is the largest island of Sierra Leone, North for the Sherbrooke River, south of the West Bay, belonging to the southern province, the town of Baoma, Bonthe. Rice cultivation and fisheries are major economic activities. Population 18,991 (1974).